During 2019 the School Council decided we needed a school pet, after much discussion and research it was decided a dog would be most suitable.  Without the children knowing Mrs Warren set about finding a suitable breed and puppy. We wanted a dog that would be; just the right size, not too hairy, easy to train and good with children.

Olive is minature Labradoodle, currently age 6 months. She lives at home with Mrs Warren and her family who are doing lots of puppy training.  Olive has had lessons with a dog trainer and she is proving to be a very clever puppy.  We are doing well with basic things such as sit, lie down, staying calm when she gets her dinner or meets new people and walking on a lead (There are always lots of treats or toys involved) In November Olive is attending  Puppy University where we will learn even more positive behaviours.

Initially, Olive will be coming into school one or two days a week, getting used to the sight and smells in and around school. Olive will be based in the offices where it is quieter so she can rest and sleep when not interacting with the children. Olive has begun to see the children for short periods of time; visiting classrooms during carpet time and walking round the corridors while children are learning.  As Olive's training progresses and she becomes more used to school she will be able to listen to children read in small groups etc. 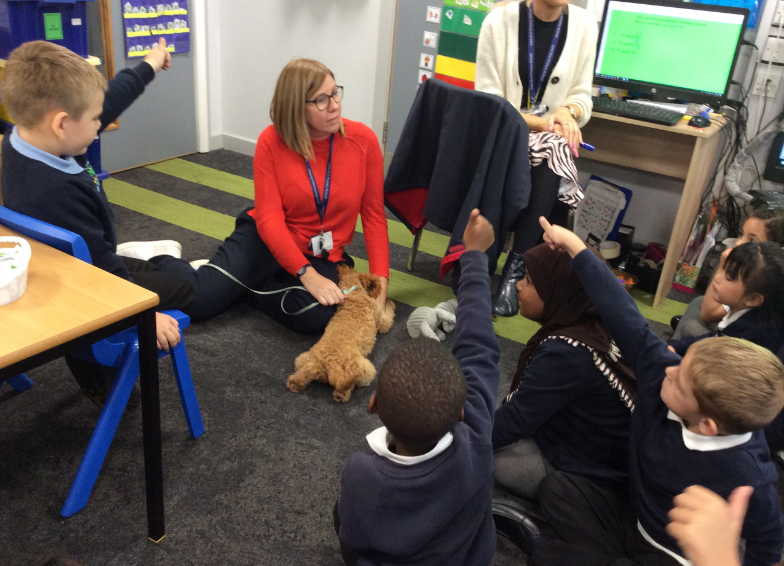 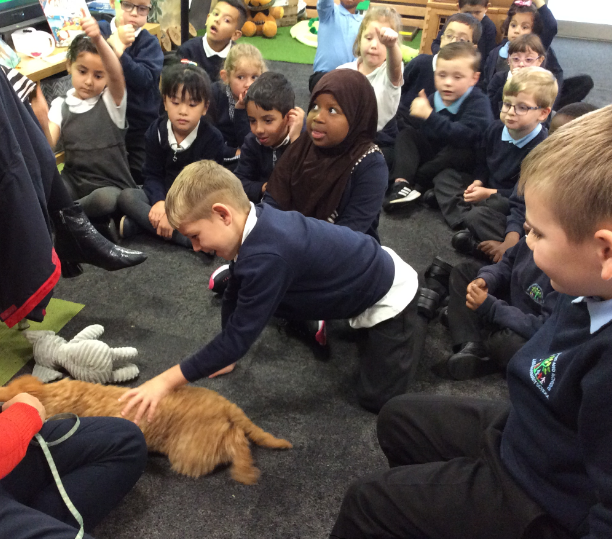 Olive practised lying quietly while the children asked questions and told Mrs Warren what they had found out about caring for a dog.  We also learned how to gently stroke Olive on the back.

The year 1 children did an amazing job of being calm around Olive even though they were very excited!

School council have been set the task of going to talk to their classmates so they are able to bring suggestions to the next school council meeting of activities pupils would like to do with Olive in school.

Mr Tabiner, Mrs Warren and the school councillors will then decide which are the most suitable suggestions for Olive at this time in her training.