A team of Year 5 and 6 pupils from Lane End, coached by Mr O’Malley and Mr Birch, played an entertaining football match filled with goals. It was a terrific display of both attacking and defending from Lane End resulting in a 13-2 victory against local neighbours Greenmount Primary School.

It was the team’s first game post Covid-19 pandemic. In the first few minutes, Sello was dribbling past defenders as he spotted an impressive run from Joshua, who then opened with the first goal. Greenmount then came back strong with an attacking display which was matched with equal determination by defending duo Paola and Grace, along with Harry in goal. After the first interval, it was a tight and well-fought 1-0 to Lane End.

For the last two quarters, Grace stepped up and volunteered to play as goalkeeper whilst Harry then took the role as the spear head of the attack. From the first whistle, Lane End then once again took control of the game with three quick goals from Harry and fantastic individual goal outside the box from Joshua. Despite conceding another goal, the players kept their resilience and determination, this showed in the end result.

The game finished with an impressive display from Lane End. It was amazing to see the players being both gracious in victory and showing support for the other team. It was great to witness so many parents, other members of staff and even class peers supporting both teams.

It all started with a letter home before we broke up for the Christmas holidays....

As you know, the children at Lane End are brimming with skill and talent! We have 'Talent Awards' for all our curriculum subject – where we recognise and celebrate the successes with our amazing artists, super scientists and daring designers! But we also know that pupils at Lane End all have many, many other skills and talents that we don’t often get to see in lesson times.

So, inspired by an idea suggested by Abi Foster in Year 4, we decided to ask them to share some of their other talents with us – in a ‘Lane End’s Got Talent’ show!

"So, whether you have magnificent magic skills, can sing or rap like a pop star, have dance moves that compare to those seen in the movies, tell jolly can jokes that make all your family giggle, can play a musical instrument like a maestro…. or whatever your talent might be… this is the opportunity for you!"

How did the pupils enter ...

Pupils were encouraged to send in a video of their talent over the Christmas holidays....

Any pupils who could not be filmed at home were filmed in school in January.

In total 73 pupils took part, some of them as part of a group entry!

Round 1 - The 'Talent Committee' had a very difficult job with so many fantastic and varied entries. After much deliberation they narrowed it down to the top 16.

Round 2 - The Final 16 entries were sent out to each class. The 16 videos were watched by each class and they had to decide on their favourite 5 and score points in "Eurovision style". Democracy in action!

Round 3 - The scores and totals were checked and double checked by an independent adjudicatory and then whittled down to a Final 10.

There was much excitement and enthusiasm as the Live Final began on Friday 4th February. The final 10 had many varied and wonderful skills and talents.

Joshua and Jeremiah- Drums and accordion

Runner up Christabelle for her amazing choregraphed dancing to Dance Monkey. 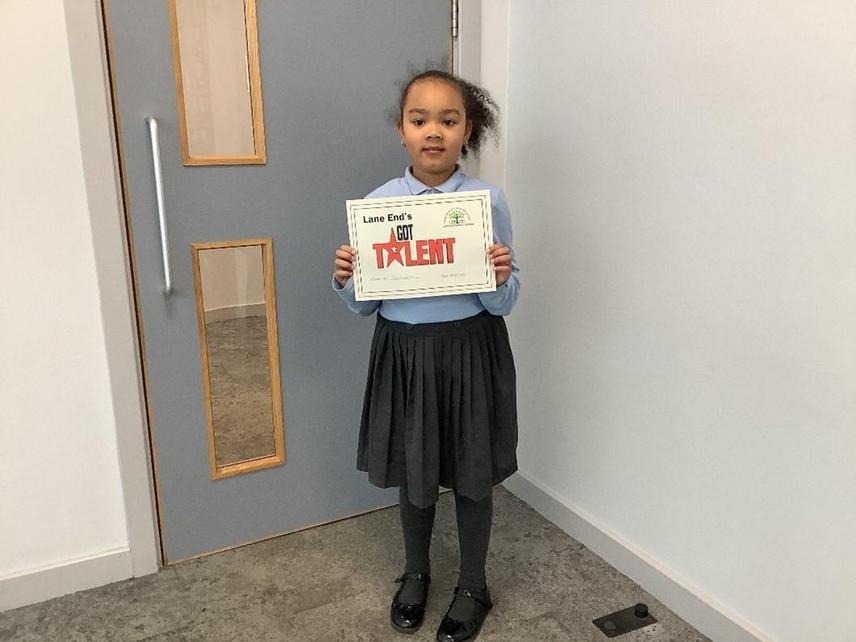 Runner up Joshua and Jeremiah for their skills on the drums and accordion. 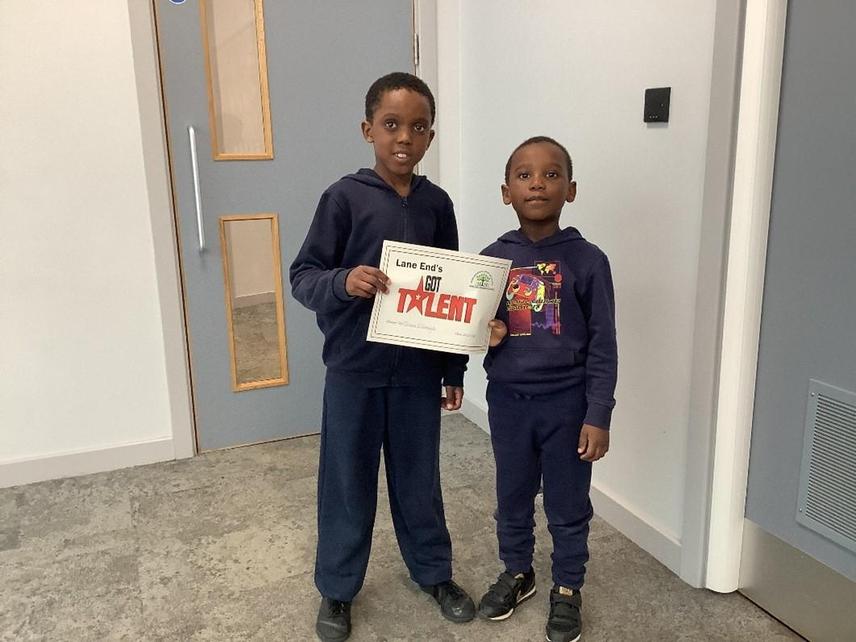 The winner was Awais, for his dancing to Savage Love. He showed such passion and confidence in the final when he performed in front of the finalists, judging committee and all the school watching on live stream. 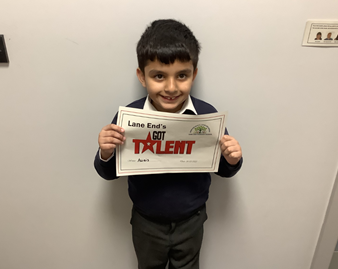 Well done to all the pupils who entered and if one thing is clear. Lane End really does have Talent!!!

A team of Year 3 and 4 children from Lane End, led by manager duo Mr Black and Mr Daykin, did themselves and the school proud as they fought hard in a 4-2 home defeat to local neighbours St Luke’s.

In the team’s first ever match together, Lane End found themselves 1-0 down inside the first minute and soon lost influential defender Nina to an injury – though she and the team would both be back. Lane End equalised in the second quarter with a cool finish from Abdullah before going ahead thanks to Kaylaine’s left-footed shot squeezing under the St Luke’s goalkeeper. Unfortunately, St Luke’s scored three further goals, including one with the last kick of the game, to win by four goals to two. It was a terrific contest between two impressive and strong teams, with Lane End cheered on by staff and parents of the ten players. The squad, led by managers Mr Daykin and Mr Black, included goalkeeper Kerby, defenders Sami and Nina, midfielders Aziz and Abdullah, as well as wingers Kaylaine and Saleh, backed up by substitutes Jeton, Milka and Gio. All ten players did the school, managers and themselves extremely proud with their magnificent efforts, and we can’t wait to see them in action again.

Our very own Mr Forsythe found out about Kitmas a charity set up by the comedian Mark Watson. The charity aims to brighten the Christmas of children in the UK by collecting and distributing football shirts to Kids who may not otherwise get the chance to wear one.  At Lane End Primary we have been lucky enough to be gifted 90 football tops of various sizes and football teams.  Children across school were offered the opportunity to put their names into a prize draw to take home their very own Football shirts! Here are some of the lucky winners…Go team!

This was something that had been planned to start in the summer term… but things got in the way!

All the class teachers were asked to think carefully and then nominate a pupil from their class that has demonstrated excellence in different curriculum subjects—and this term is was in the areas of Mathematics, Reading, Science and Art.

Teachers considered the Lane End skills and attributes that each of these subjects want to develop in our children.

They were to put forward pupils that show a real flair for the subject, are working hard with determination to build their knowledge, skills and understanding in that curriculum area, and work with passion and enthusiasm. They were to chose children that were a learning role model for others, and deserved the recognition for this.

Then the final nominations were in! Our original plan was to have a Curriculum Talent Award showcase assembly—where class teachers and curriculum lead teachers could talk about the achievements of their nominated children—with parents invited to share in the celebrations too. Then the overall winner for each subject would be revealed, and certificates and prizes awarded.

As we are unable to do this at the moment—we instead had a virtual Curriculum Talent Award assembly in school last Friday afternoon. Each class came together remotely, and the nominated pupils, with work and reasons for the choices were shared with all the children.

The nominated pupils will be given their certificates and mini prizes this week—with the overall winner receiving a main prize and Curriculum Talent Award trophy for them to keep. We were very proud to share the achievements of these children last week, and I know the Lead Teachers found it very hard to choose a winner in each subject as all nominations demonstrated excellence. Well done children… and watch out for the next Curriculum Talent Awards next term too.

A book for every Child

This week we were gifted 447 copies of the Emergency Penguin Story by the local Slung Low Theatre Group from Holbeck. They have adapted one of their plays into a book and gifted them to local schools. What a lovely surprise for all our children to take home! 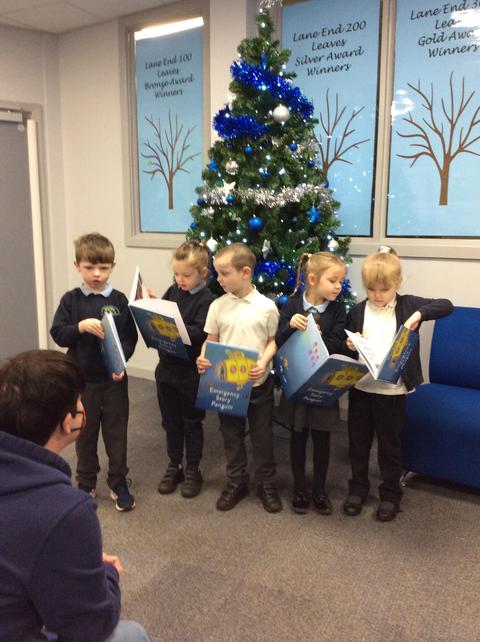 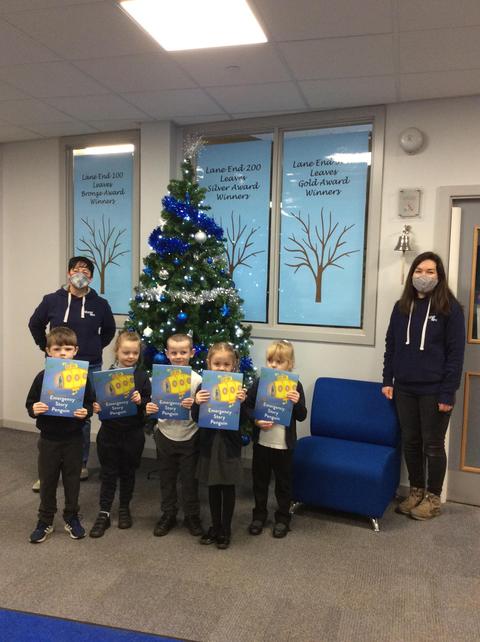 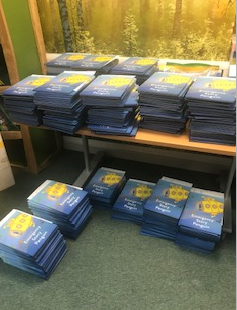 We saw the Reception and Nursery dress rehearsal performance in the Hall - they were loud and clear and even though they were little they didn't give up. Zaryaab said "I really liked the part when the angels came and sang on stage especially when my sister was singing!" They danced smoothly and beautifully with their shiny, silver tinsel headbands twinkling under the lights. Rayyan said,  "I liked the songs, they were loud and clear and although the children were not in Key Stage One or Two, they still were not nervous and remembered their lines - especially Mary!" The innkeepers were loud and they had good actions - their song was good too. We could hear their lines, like "too late! We are full up!"

The song called 'Miracle in Town' at the end of the show was our favourite because it was loud and jolly and all of Reception and Nursery stood up together to sing it to us.

Written by Zaryaab and Rayyan (Year 3a)

“Wow what a contest! With difficult weather conditions Lane End Primary FC were very competitive in their first every game. The team spirit was amazing there was no moaning or grumbling about the rain and cold, just encouragement and support for teammates. St Luke’s brought a strong team over but we more than held our own and we are looking forward to a rematch after some practice. We should be very proud of this team for representing the school so well.”

Highlight of the game: “It had to be the 2 goals we scored; one amazing strike by Tanelle and a last minute top corner screamer by Kobi”.

Player Comments: “I had skills, the match was perfect!” Thierry.

“It was good, we played well as a team and it was a little bit hard.” Tanelle.

“It was cold but so fun in the shivering wind.” Abdoel.

“It was fun and exciting and can’t wait to do it again” Laila-Grace.

On Tuesday 25 November 2018 a team of children from Lane End played a football match against St Lukes.  The kick off was at 3:30. Some children started off the game, after five minute Mr Hawksworth started changing people around. Just then St Lukes scored a goal so Lane End had to step it up. When it was half time we came up with a plan. So after half time was done, Lane End came out and scored a goal. The game carried on with St Lukes scoring 5 goals and Lane End scoring 2 goals. It was fun after all.

Unfortunately not the ones with chocolate chips.

Some cookies are necessary in order to make this website function correctly. These are set by default and whilst you can block or delete them by changing your browser settings, some functionality such as being able to log in to the website will not work if you do this. The necessary cookies set on this website are as follows:

Cookies that are not necessary to make the website work, but which enable additional functionality, can also be set. By default these cookies are disabled, but you can choose to enable them below: